The first time, the busy lawmaker had not yet entered the event (dubbed the Gold Anniversary Vanguard Celebration) held underneath a giant tent at the Roosevelt Golf Course located across the street from the iconic Greek Theatre.

Schiff, who, as chairman of the House Intelligence Committee, has emerged as a driving force of Democratic lawmakers’ impeachment inquiry of President Donald Trump, may have been a few minutes late, but he was a warmly received as the gala’s guest of honor.

“I can’t tell you how proud I am to represent the Los Angeles LGBT Center in Washington D.C.,” Schiff said to the more than 1,000 guests who also attended the post-dinner Hearts of Gold concert and multimedia show at the Greek.

“The Center—now for a half a century—has provided life-saving services for my constituents, for so many in need and who are struggling,” Schiff said. “There is no more powerful need than now for a Center with love at its core and love in its heart… What an incredible half-century, what an incredible story!”

Rather than stick to his originally prepared remarks, Schiff chose to read directly from an article recently published in the Los Angeles Blade by longtime LGBT reporter Karen Ocamb:

It’s spectacular, ironic really, just as the fabric of American democracy is being shredded, an organization started by a group of gay people being of service to the most marginalized in 1969 has become the nation’s oldest LGBTQ institution still serving those in need.

The congressman also introduced Center CEO Lorri L. Jean of whom he said: “I can’t imagine anyone that I would rather have on my side in the fight for healthcare, for equality, for humanity, and for basic decency than the woman who has led this organization to this very moment in history. [House Speaker] Nancy Pelosi likes to say that the times have found us. Well, they have certainly found Lorri Jean—and thank God they have.” 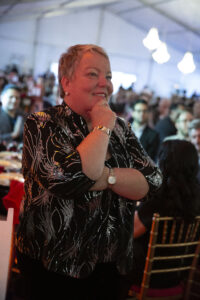 Jean (pictured, left), who oversees the Center’s nearly 800 employees and 10 facilities, reminded the crowd of a world that was dramatically different 50 years ago.

“In 1969 we were virtual pariahs—reviled as mentally ill deviants,” she said. “There were no laws to protect us from discrimination. We could be—and frequently were—arrested simply for having a drink in a bar with others of our kind. Jailed for wearing clothes that the cops didn’t think were appropriate for our gender. Queer people who came out or were outed lost their jobs. We lost our children. We were disowned by our families. Those who dared speak the truth did so at their peril.”

Jean spoke of the “audacity and bravery” it took in that climate for the Center’s founders—Don Kilhefner, Morris Kight, Jim Kepner, June Herrle, Martin Field, Jon Platania, and Lee Hansen Sisson—to organize, help one another, and claim their rightful place in history. At least one of the Center’s founders—the late Kight—first began providing services to LGBT people in need as early as 1969.

“These were the people who came together to legally create our Center,” Jean said. “It took real courage and fortitude to incorporate an openly LGBT organization in 1971. Their names were on the legal documents for all to see.”

As the longest-serving CEO in the Center’s history, Jean paid tribute to the seven other people who served at the helm of the Center during its 50 years: Torie Osborne, John Brown, Dickson Hingson, and Kilhefner—all of whom attended the event; Gwenn Baldwin and Steve Schulte, who could not attend; and Eric Rofes, who died in 2006.

“I wasn’t around when Don was leading the Center, but I’ve heard many stories,” Jean told the crowd. “He was both courageous and relentless. By all accounts, he was the most important driving force in the Center’s early years. Don was dedicated, determined, and a visionary.”

She added: “We wouldn’t be where we are today without our former executive directors who helped to build the foundation on which today’s Center stands.”