Robert Harrison had just graduated from UCLA with a degree in psychology in 1980 when he decided to become a Center volunteer.

Harrison was 23 when he became a facilitator of a men’s discussion group and soon after the men’s coming out group.

“It was mostly men getting together and worried about coming out and being discriminated against,” he recalled. “The main discussion was about trying to feel good about yourself, dating, discrimination at work, and family rejection.”

A Los Angeles County Superior Court Judge by profession, Harrison recalls how quickly he realized in those early days that he had the natural skills to lead a peer group. He did some volunteer legal work and even facilitated a women’s discussion group. More recently, he’s led MASQ, a group exploring male identities.

“Things have changed so much over the 40 years, and he’s been able to adapt which is extraordinary,” observes fellow group moderator Ryan Provencher. “He’s really good at getting people to open up and share their experiences. He’s an amazing active listener.”

“We Were the Outlet for People”

Things changed dramatically for Harrison when the AIDS epidemic hit in full force, with the community in deep crisis. Group attendance at the semiweekly meetings often swelled from 15–20 men to more than 50.

“People were feeling anxieties and fears about dating, going to bars, sex. Their friends were falling like flies around them,” Harrison said. “The meetings were important for people. But, imagine going to a group, and nothing could answer your terror or your anger over the change in your life. A support group could only do so much, but we were the outlet for people.”

As he leads discussion groups online nowadays, he sees parallels between the AIDS crisis and the current COVID-19 pandemic.

“AIDS was about having no sex in order to survive—same  problem people are dealing with coronavirus,” he points out.  “They want to flout restrictions even if they know it’s exposing them to illness and death.”

This month Harrison will be presented with a special award­—virtually—for his four decades of service, according to the Center’s Social Networking Groups Coordinator Cain Andrade. 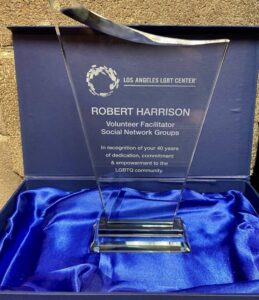 “The level of commitment to serving his community year in and year out is remarkable,” Andrade says. “He has a wealth of knowledge which he can share with all of us and remind us just how far we’ve really come. That’s important to the groups.”

“I’m here as long as they’ll have me,” he promises. “I learn so much. I get to meet people from whole other life histories and learn about their experiences. We get to figure out problems together.”

Provencher marvels at Harrison’s longevity as a Center volunteer and says he has been an important mentor for other moderators of group discussions.

“The facilitator has the job of providing topics and information and getting people to talk and contribute,” Provencher explains.  “Imagine having someone in the Coming Out group go from being in the closet and having told no one to being fully out to friends and family months later—that is pretty beautiful. Imagine Robert doing that through four decades. Consistently. It’s not like he’s taken breaks. How often have you heard of that in any group, ever? That’s something worth celebrating.”

Do you want to become a Center volunteer? Get all the details at lalgbtcenter.org/volunteer.