Anyone who has spent time in South Los Angeles working on HIV and AIDS over the last four decades likely knows of Dr. Wilbert C. Jordan.

So, when it came time to inaugurate Center South, the Los Angeles LGBT Center’s expansion near Leimert Park, CEO Lorri L. Jean said there was no one more deserving to honor at the grand opening than Jordan.

“He has worked tirelessly for more than 40 years to care for people with HIV and AIDS, often people that few others wanted: addicts, gay and bisexual men, transgender women,” Jean said at the January 11 event. “Dr. Jordan was always there for them, for us. Caring for us, advocating for us, treating us with dignity and respect.” 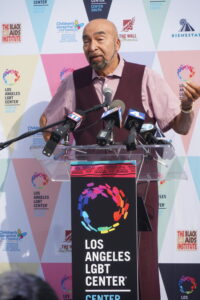 Jordan, founder of the AIDS Clinic at King-Drew Medical Center (now called Oasis Clinic), treated his first patient living with AIDS in 1979 before the disease even had a name. He spent many years on the Los Angeles County HIV Planning Council and received Surgeon General’s Award in 2000 for his pioneering work.

Jordan had some straightforward words of wisdom for the crowd of nearly 250 people, comparing the early days of the epidemic when he would see young men facing almost certain death to all of the life-saving medical advances available nowadays including PrEP (pre-exposure prophylaxis), the one-pill-a-day regimen that reduces the risk of HIV infection by up to 99%.

“Many of you don’t appreciate how far we’ve come,” he said. “Some of you complain about taking one pill a day. I had patients taking 48 pills a day—and they whipped your ass. They were terrible in the early days. We’ve got a long way to go, but we have come a long way. We have a pill that—if you are HIV-negative, I don’t care what you like to do, where you like to do it, when you like to do it—if you simply take that one pill, you can keep from becoming HIV-positive. Take the damned pill!”

Center South’s programs and services include HIV testing and access to PrEP and PEP (post-exposure prophylaxis) for gay and bisexual men of color who continue to be disproportionately test positive for HIV.

Currently, 1 in 4 Latino gay and bisexual men—and 1 in 2 Black gay and bi men—will test positive sometime in their lives if nothing is done to curb HIV transmission.

Jordan stressed the importance of knowing your status and getting into treatment as soon as possible if you test positive for the virus.

“If you are HIV positive and you take the medicine which now is usually one pill and at most is three, you can become undetectable and then you cannot infect anyone,” he explained. “I hope all of you will take it upon yourself to encourage your friends—if you think they are HIV positive—to get their ass in care. There’s no reason to have folks still not in care.”