Trending
You are at:Home»Community»Seniors»Cream of the Crop! The Center Celebrates First Graduates of Culinary Arts Program

“Everybody is so emotional because it’s such an exciting thing that’s happening,” said Feniger to the more than 100 people who packed Pride Hall for the July 26 graduation ceremony. 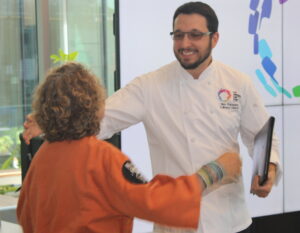 Launched in May at the Center’s new intergenerational Anita May Rosenstein Campus, the program’s first graduates successfully completed a 12-week, 300-hour program which consisted of four weeks of basic culinary skills development, four weeks of preparing meals for Center clients and events, and a four-week internship at a local restaurant.

The culinary program is for youth ages 18-24 and seniors ages 50 and over. Fifty students are expected to graduate in the first year; 100 graduates expected by year two.

“You have given me an unbelievable gift,” added Feniger, who conceptualized the program. “To see everybody standing here, believing in what they’re doing is very precious. I really am very proud to be standing up here in front of the very first graduating class. You guys rock in a big way!”

From learning the culinary basics—such as holding a knife, breaking down a chicken, and making sauces—the group went on to prepare 10,450 meals for the youth members and senior clients.

“I’m so proud of them. They work really hard every day, showing up and putting all their love and pride into their work,” said Executive Chef Instructor Janet Crandall at the podium. “They’re pioneers—the first ones to go through this whole program.”

She then turned to the grads and said: “I wish you the best of luck. Cook with love and pride. I’m always here for you.” 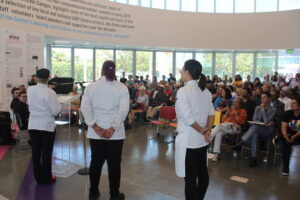 Graduate Andrew Gonzales received a special award for going “above and beyond to demonstrate a service mentality.” He missed a week from the program in order to volunteer as a Roadie for AIDS/LifeCycle, the seven-day, 545-mile bike ride from San Francisco to Los Angeles. Upon his return,Gonzales made up all of his missed hours.

“I am so proud of my classmates, and I am so thankful to have great instructors,” said graduate Millie Rios. “Every single person in the Center made this possible. We came in with such energy, and we wanted to get things done.”

Gia, a graduate who identifies as non-binary and uses they pronouns, shared with attendees that they had never been in a professional setting before their culinary internship.

“I never thought I would work somewhere where I would be accepted. Now I work in an amazing kitchen where everyone is accepted for who they are. That’s what happens when someone creates an environment and sets an example,” they said. “I am finally able to say I am the person I dreamed of becoming. I want someone like me to be able to go into any kitchen and be comfortable and be themselves.”

Feniger, who serves on the Center’s Board of Directors and has been part of Los Angeles’ culinary community for the past 40 years, says the culinary industry “is all about family.”

“It’s an industry that relies so much on teamwork and looking out for each other. Your co-workers very quickly become part of a family unit. In the queer community, where sometimes we don’t have the luxury of a normal, nuclear family, I’m thrilled that this training program can provide that potential to those in our community who so desperately need one.”