Los Angeles LGBT Center staffers were among those selected to ask questions to Democratic Presidential hopefuls during CNN’s Equality Town Hall in Los Angeles on October 10.

National Community Center Policy Manager Tanya Tassi asked Senator Kamala Harris what protections she would put in place to ensure a discrimination-free environment in the workplace. 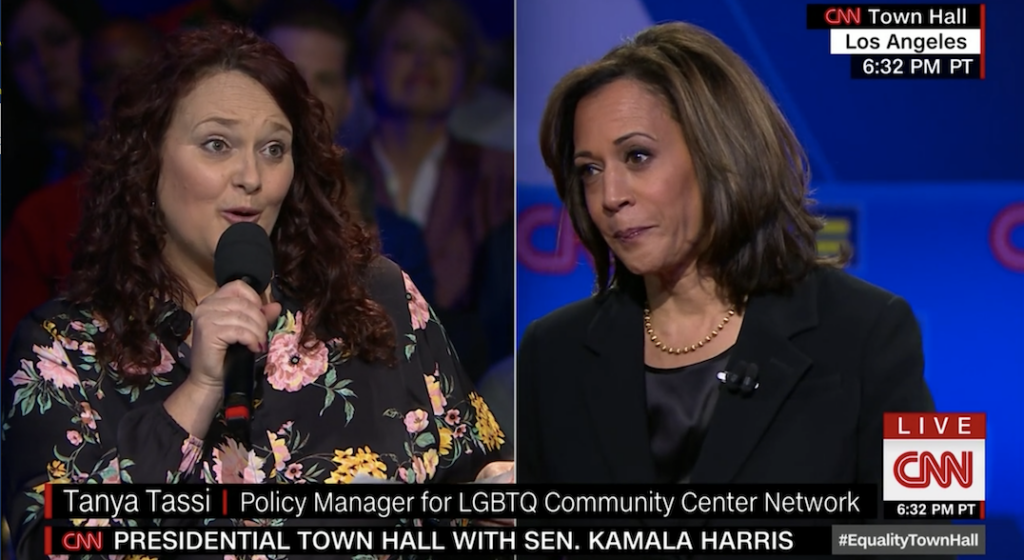 “How can we ever defend that our LGBTQ brother and sisters are treated differently under the law when they walk into their place of work?” Harris replied. “It’s a fundamental issue as far as I’m concerned. I will stand and fight for equality every day of the week.”

The question comes as the US Supreme Court is considering a case about gay and transgender workers are covered under Title VII of the Civil Rights Act of 1964, which bars employers from discriminating against employees on the basis of sex.

“Leaving my country was not a matter of a better life—that was my only option to survive,” shared Marroquin, who was born in Guatemala. “There’s a possibility right now that all the asylum seekers are sent back to the same country where they experienced persecution, harassment, and even torture to wait for the asylum process.” 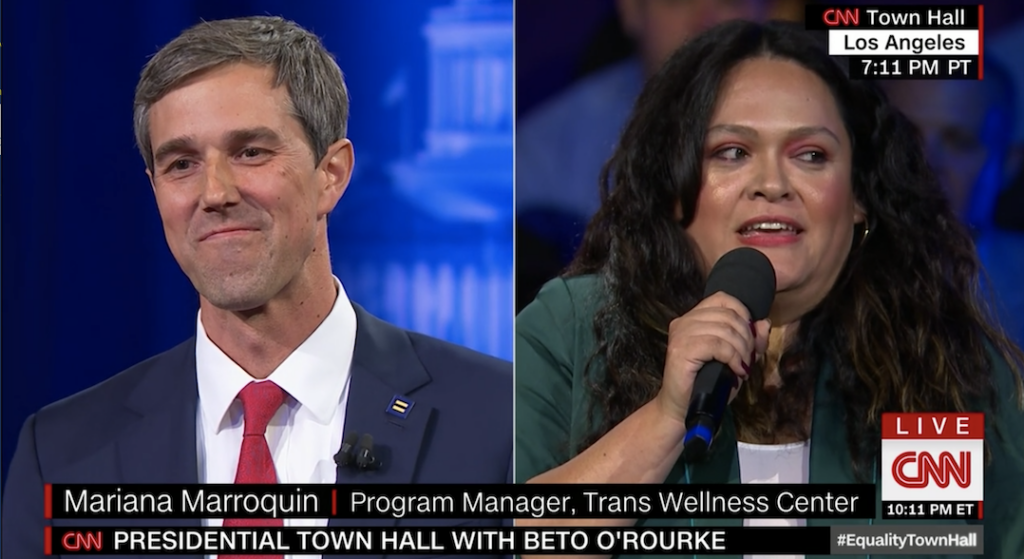 She then asked former Texas Congressman Beto O’Rourke if he has a plan to deal with this crisis.

“Unfortunately, we are going in exactly the opposite direction,” O’Rourke acknowledged. “We no longer recognize this as a valid claim for asylum, though we know that when we turn people back to their country of origin, where they face persecution, they often face certain death. We have to make sure that we welcome all of those who literally have no other place to go to.”

When the evening’s final candidate, businessman Tom Steyer, was on the stage, he was asked by the Center’s Policy and Operations Manager Maria Melo about LGBTQ asylum seekers being denied parole in detention centers across the country.

“Will your administration be ready from day one to put in place strong measures and penalties to increase oversight over HIV health care access in detention centers across the country and save lives of LGBT asylum seekers?” she asked.

Steyer said he believes “it’s absolutely critical for the United States of America to treat people in a humane and decent fashion” and accused President Donald Trump of “committing crimes against humanity” in the name of the U.S.”

In addition to Harris, O’Rourke, and Steyer, other candidates who took part in the forum were Julián Castro, Elizabeth Warren, Joe Biden, Cory Booker, Pete Buttigieg, and Amy Klobuchar. Each candidate was given approximately 30 minutes of airtime answering questions by LGBTQ members of the audience.

Approximately 75 people gathered at the Center’s Anita May Rosenstein Campus to watch the forum, which has held at L.A. Live in downtown Los Angeles.

Viewer Eddie Edwards was glad to hear immigration addressed by some of the candidates.

“LGBT people in other countries are more at risk of being killed,” Edwards said. “I believe they should be given special consideration in being allowed to enter our country for their safety. I haven’t heard enough about this from candidates. I’d like to have them address it on the campaign trail.”

Joy, who also attended the viewing party, was taking note of the candidate’s positions on transgender issues because she has a 15-year-old trans child.

“I’m really concerned about what my kid’s future employment options will be and what my kid’s chances of being violently attacked will be,” she said. “When I heard Donald Trump come out with a ban on trans people in the military, I was appalled. People deserve to have their jobs without being humiliated or fired.”

Center staffer Bella Gavilan was also focused on what the candidates said about discrimination against LGBTQ people.

“I was discriminated against in a previous job,” said Gavilan, a human resources administrative assistant at the Center.  “I was there for eight years and was supposed to be up for district manager. They brought someone else in from outside of the company rather than have someone who is transgender as the district manager. They let me go in 2013 and there was nothing I could do. I’ve seen this discrimination first-hand. This happens to us a lot.”