With a husband and two small children, Mandy Richardville’s house was already full when her family decided to make room for a young, transgender youth named Dre who moved in with them in December 2019.

“He really livened up our house,” she recollected. “He was so kind and thoughtful and really made a mark on us. We were really excited to get him in before Christmas knowing he had experienced homelessness and was estranged from his own family.”

Dre’s three-month stay with the Richardville’s was arranged through the Center’s Host Homes program in which an LGBTQ youth is housed in a local, private home for up to six months to help bridge the gap between homelessness and permanent housing.

The participating youth are between the ages of 18–24 and receive counseling, transition services, and permanent housing assistance from Center staff. In addition to spending Christmas together, Dre was still living with the family when he obtained his official name change and gender marker.

“This program has been the most love and support that I’ve ever experienced in my life,” said the 19-year-old. ”I was able to have the motivation to do things which I normally wouldn’t do—I went out of my comfort zone. The program gave me the strength and motivation to finish something.”

Carlton Ellis, another youth who participated in the Host Homes program, arrived in Los Angeles from Alabama “on just a wing and a prayer,” he says.

“I was a gay black man in the South from a strong Christian family,” said Ellis, now 23. “I left because I wanted to start a life for myself.”

He stayed for a month in the Redondo Beach home of a lesbian couple before having enough resources to move into his own apartment.

“It’s a useful transition from shelter living to apartment living where I have a nice place to lay my head, to have my own shower, to have my own bathroom.” Ellis, who now works as a peer support specialist in the Center’s Children, Youth & Family Services, says he is grateful for the role which Host Homes played in helping him start an independent life.

“What I like about the program is that they don’t just put you anywhere,” he said. “They actually take time to really find out if this is going to be beneficial to the youth and the path the youth is trying to pursue.”

Compared to Dre, Ellis didn’t interact much with his hosts during his stay. Dre had dinner most nights with the Richardville family and also joined them for games of Uno and repeated viewings of the Disney Channel’s musical Descendants.

“Dre had long hours, and you could tell he wanted to be at our home,” Richardville said. “Dre joined right into our family activities. It was a lot more fun than having a youth shut in their room. My family still talks about Dre.”

Amid the good times, there can be boundaries to be resolved between hosts and youth. For instance, hosts must acknowledge that a youth is considered an independent adult—not as a child—coming into their home.

“We do not ask the hosts to be case managers, parents, or best friends to the youth,” explained Director of Community-based Programs Kevin McCloskey, from the Center’s Children, Youth & Family Services Department. “Sometimes the hosts have to reimagine their expectations and what their relationship is going to be with the young person. The best hosts understand what they’re doing: providing a safe space and a community for this young adult.”

Host Homes already has established a track record of success with 80 percent of the participants obtaining their own apartments through supportive housing, being reconnected with family, or achieving independent living.

“All of the young people have made steps in their educational or employment goals,” McCloskey said. “Once you remove housing instability from being one of the challenges the young people face, they are able to focus on other goals and work toward becoming more self-sufficient.”

On any given night in Los Angeles, approximately 5,000 youth experiencing homelessness are surviving on the streets of Los Angeles. In Hollywood, a staggering 40 percent of them identify as LGBTQ. 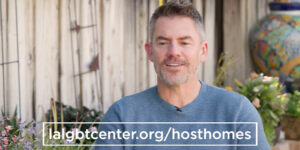 “We have youth and social workers contacting us every single week looking for host homes, and we just don’t have the number of hosts to meet that need,” said McCloskey (pictured, right). “Right now, we are recruiting hosts and families of all shapes and sizes: single folks in an apartment, married queer couples in beautiful homes, and everything in between. There is not one cookie cutter approach to this—we’ve seen a variety of hosts have successful experiences.”

Potential hosts are invited to participate in the next orientation scheduled for Saturday, July 17. The virtual session, which lasts four to six hours, is mandatory for anyone wanting to be considered for the program.

Hosts must be over the age of 30 and have a private room available in their homes, must carry homeowners or renters insurance, and complete a variety of steps—a background check, home inspection, interview process, and training—before they qualify to be matched with a youth. Both the youth and the hosts enter into a contract covering basic house rules and boundaries, including COVID-19 protocols.

“It’s a chance to learn, to ask questions, and to meet other potential hosts. We talk about who these young people are and what challenges they face,” said McCloskey. “If you have an underutilized bedroom and a heart to help a young person, you are right for our program. It doesn’t matter where you live or what your housing looks like. We’re more interested in learning about you as a potential host.”

The selection process works both ways. For youth considering an application for housing, Ellis emphasized that the program may not work for every youth applicant and to keep all their options open.

“No program is set in stone or guaranteed. There’s a possibility it might not go well the first time, but don’t give up and don’t get dismayed,” he shared. “The Host Homes is a good program, and the Center will work with you to determine what’s good for you.”

‘OUT for Safe Schools’ Provides Critical Ally Support for LGBTQ+ Students, Both Locally and Nationally

Models of Pride Returns Live and In Person: “You Are Going To Change Our Future”