Filmmaker Luisa Conlon knew she had an attentive audience when she took part in a recent virtual screening of her documentary short film Senior Prom.

“I hope I did the prom justice,” Conlon said after the June 21 screening for the Los Angeles LGBT Center’s senior clients. “Some of you might have spotted friends and spotted yourselves in there, and I hope you enjoyed it.” 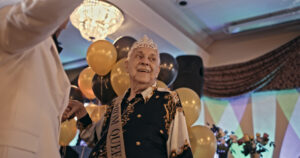 The heartwarming 14-minute film, which premiered on PBS Voices’ YouTube platform in June for Pride month, was filmed at Pickwick Gardens in Burbank in 2017 and 2019 during the annual Senior Prom event organized each year by the Center’s Senior Services department.

“I thought it would just be about the prom, but you told us so much about our lives,” senior Rusty Santangelo told Conlon during the post-film discussion. “It really reaches hearts and minds. You gave the background that explained the significance of it. Bless you for doing this because it really gives us a visibility that can help the younger generation see that this is not just us reminiscing. What you’ve done is significant because you’re capturing it for the future. I thought it was wonderful.”

The Center’s prom empowers LGBT seniors with the freedom and excitement to take back the night they never had the chance to have. It also honors those who fought for the right to love, live, and dance openly.

The movie chronicles preparation for and attendance at this highly-anticipated event. It captures the magic and energy of a night of dancing, kissing, and laughing, and it culminates in the crowning of prom queens.

The film also showcases the stories of three trailblazing seniors who live at the Center’s Triangle Square apartments:

“Our prom is really an expression of ourselves,” said Santangelo. “It’s super creative, super gay, super beautiful, super wonderful. A lot of people think older people can’t even dance anymore. We have some wonderful dancing and dancers.” 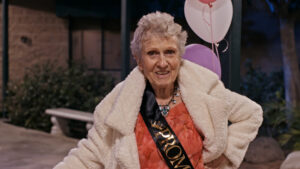 Senior Prom is produced by the queer, female-led production company Cousins. Conlon finished it during some of the worst months of the COVID-19 pandemic.

“I think we’ve all had such a difficult year so it’s been really wonderful for me to be editing this and to be able to live in this world of this prom,” she told the group. “It was really, really special.”

“I am thrilled with the response that it’s getting,” Conlon said. “I think a lot of people can really relate to this experience of not being able to go to their own proms. I think it’s starting a lot of conversations with young people who don’t know their history. It’s been a very fulfilling experience for me, and I’m just happy that people seem to be liking it.”

For more information about the Center’s Senior Services, visit lalgbtcenter.org/seniors